The Blum Center is pleased to announce the Cooperative Economics initiative, which aims to promote scholarly and public understanding of the principles, practices, and prospects for cooperative enterprise on the Central Coast of California, in the U.S., and worldwide. In this first year, the initiative involves an inaugural keynote address, a workshop on cooperation and social justice, and funding to seed a generation of research by UCSB students and faculty.

"If we have the ideology of solidarity, then we're making all these kinds of collective, economic decisions based on what's best for the whole community, what are the solidarity systems that are non-exploitative etc, how do we want to operate as human beings, right? I often talk about how the current economic system makes us leave our humanity at the door, right? When we enter that black box of a business, a capitalist business, we're not supposed to really be humans, we're just supposed to be automatons and profit making machines. But we're human beings, if we connect to our economic agency as human beings, then that's how we can make solidarity economies."

On Monday, April 19th, Professor Jessica Gordon-Nembhard delivered a keynote address, which formally launched the Blum Center's Cooperative Economics initiative. Gordon-Nembhard provided a rich overview of the long (and often overlooked) history of African American cooperative enterprise. The latter was a key part of what Gordon-Nembhard called the 'long civil rights movement', which involved asserting both civil and economic rights. She underscored how engaging in cooperatives has provided a number of advantages to African Americans through history, including increased access to quality good/services in response to marginalization, pooled resources and wealth/equity, decent jobs, leadership development, and community empowerment. Gordon-Nembhard also outlined racialized barriers to participation, including economic/financial sabotage (no bank loans) and physical violence. The key differences in the principles and parameters of capitalist vs cooperative growth were also outlined in detail.

A panel discussion followed with questions from Elvia Cruz, a recent UCSB graduate involved in EcoVista and Cooperation Santa Barbara, Marcelino Sepulveda, Executive Director of the Santa Barbara Student Housing Cooperative, and Professor Christopher McAuley, UCSB Department of Black Studies. The discussion highlighted inspiring cooperative examples, such as a cooperative adult entertainment business (Lusty Ladies) that enabled its worker-owner members to have full ownership and decision-making over their business and bodies; the sustainability of cooperatives as enterprises and a broader philosophy that lead to broader civic participation for its members; as well as the crucial role of education in spreading awareness of this economic model, and the skills needed to implement the cooperative's democratic principles in terms of inclusive decision-making and voice.

The workshop panelists shared insights from their research and experience with cooperatives, with a focus on the connections between cooperation and economic and racial justice. Professor Gordon-Nembhard noted how the discrimination and exclusion of our racialized and gendered capitalist system, dating back to the institution of slavery, created the need to create an alternative system for African Americans to achieve economic survival. Gordon-Nembhard underlined how cooperatives not only provide an avenue through which they could survive, but gain a sense of self-determination, dignity, as well as pool land and resources to increase their collective wealth. Professor Saldivar explained how she and her fellow co-founders of Colectivo Para Eliminar el Racismo (COPERA) a Mexican anti-racist collective, put an emphasis on keeping the decision-making process among members inclusive and democratic, including sharing mistakes and collective problem-solving. Professor lewallen also shared insights from her fieldwork with indigenous communities in Japan, where she described how cross-generational interdependency is a critical factor in decision-making in these communities. Drawing on his local experience of leading cooperatives, Marcelino Sepulveda explained how cooperatives create an inclusive space for marginalized communities to have their voices heard and valued as co-owners. The point was made that these principles must be intentionally structured into cooperatives to facilitate justice-oriented processes and outcomes, rather than assuming these are inherent features of cooperatives themselves. 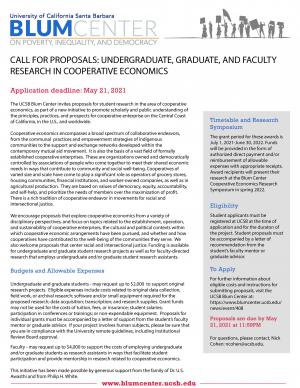 Cooperative economics encompasses a broad spectrum of collaborative endeavors, from the communal  practices and empowerment strategies of indigenous communities to the support and exchange networks developed within the contemporary mutual aid movement. It is also the basis of a vast field of formally established cooperative enterprises. These are organizations owned and democratically controlled by associations of people who come together to meet their shared economic needs in ways that contribute to community and social well-being. They are based on values of democracy, equity, accountability, and self-help, and prioritize the needs of members over the maximization of profit.

After a Call for Proposals in Spring 2021, the Blum Center is pleased to announce our inaugural cohort of Cooperative Economics Award recipients, including UCSB Faculty, Graduate, and Undergraduate students.

Click here to learn more about this exciting research!